Indian footwear industry is the second largest employment provider post-agriculture. It also stands second in the world in terms of footwear producers, this contributes to 9.57% of world’s footwear production. India’s overall production is approx 2200 million pairs cumulative of all footwear categories, out of which approx 95% is being consumed by the Indian market.

There are about 1.10 million workers who are into footwear manufacturing industry in India. The footwear industry in India is a combination of both traditional and modern sector. With time this industry is drifting more to modern retail structure, adoption of technology is an example for this. The traditional footwear sector is spread across the country, whereas the modern sector is confined majorly to cities and metros which are the major centers for exports.

Evolution of Indian Footwear with e-Commerce

After China and USA, India stands third in footwear consuming country while second in the world in terms of footwear producers. Footwear industry covers 9% of the total Indian Fashion catalog which is expected to grow four-fold to $30 billion by 2020. The growth in Indian fashion and lifestyle market has given a spur to the footwear industry as well. It has developed as a fashion and style category from a basic need-based industry. Currently, a major part of India’s fashion market is digitally influenced. 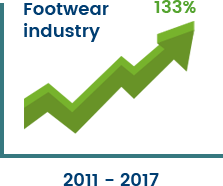 Due to the increasing demand, the e-commerce model has penetrated to the footwear industry. This has provided the ample opportunities to the SME sector to penetrate into tier II and III cities. Also, provided the platform for many enterprises and premium footwear brands an ease to try to tap the market using the e-commerce.

Online retailing has helped SME and enterprises across the country to target national consumer rather restricting themselves as regional retailers. This has opened the gates for new possibilities of online retailing i.e. multi-channel, Omnichannel and websites.

Indian footwear industry is emerging as the most demanded shopping category, brands like Bata, Campus Shoes, Action Shoes, Puma are going online and creating a niche market and opportunities for the other footwear retailers.

Challenges in the Footwear industry

Footwear industry has been largely unorganized and scattered in different parts of the country. Uttar Pradesh and Tamil Nadu, being the biggest footwear related market. Though technology has marked its presence in the modernization of the footwear industry, most of the production is still handmade. Major challenges in the Footwear Industry:

Uniware – The Solution to Overcome Challenges

Unicommerce, leading E-commerce Supply Chain solution is focused is on a mission to automate the largely scattered footwear industry to make it technology driven. Its Order and Warehouse Management solutions to automate client’s supply chain operations for online and offline businesses (Both B2B and B2C). Unicommerce comes pre-integrated with 40+ online Marketplaces and 30+ Logistic partners, with support for offline channels as well to manage the needs of Wholesalers, Distributors, Retail Chains, Individual Store owners and E-commerce sellers to increase revenue and save operations cost.